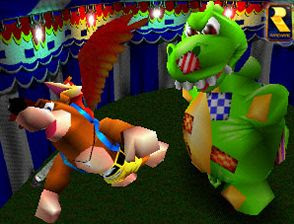 Banjo-Tooie is a 3D platformer with several gameplay enhancements such as first person shooting, flight with the ability to shoot in the air, underwater first person shooting, mini-games, and the ability to change between characters with different control options. Most of the time during combat, you are using quick and easy attacks that kill small enemies in usually 1 or 2 hits. Using different characters doesn’t change the gameplay significantly, so splitting Banjo and Kazooie and playing as Mumbo will lose its novelty very fast. You can transform into several different objects like a washing machine that cleans clothes, a snowball that becomes bigger while rolling in the snow, and a TNT detonator used for explosives. The transformations are a lot more fun to use than the previous Banjo-Kazooie game because they move a lot faster and can fight back, but sometimes the trip to Humba Wumba the shape-shifter feels like transformations are used more than they should. The bosses are a great test of skill and play good villains for Banjo and Kazooie, especially Gruntilda (I need to name drop her, Grunty is hilarious). Mr. Patch requires you to fly, go in first person flight mode, and shoot eggs (ammunition) at his patches. Lord Woo Fak Fak requires you to swim underwater and shoot submarine missiles at his boils. Targitzan requires you to go in first person shooting mode and shoot the moving targets on his body. Mini-games include hitting or collecting as many things as possible in a time limit, jumping in hoops, shooting targets while flying or swimming, and even quizzing you about the game. They are good to play with friends but they don’t require a lot of skill except when you are connected to Xbox Live and compete using the leaderboards. The core of the game is exploring different worlds in the game’s hub world and collecting items (Jinjos, Cheato Pages, Notes, Jiggies) by running, jumping to higher places, killing enemies, shooting things, activating switches, and delivering items to other characters, while watching the humorous interactions between Banjo, Kazooie, and the other characters. Jiggies are the most important items to collect in the game because the more you collect, the more accessible worlds there will be. Notes are used to help Banjo and Kazooie learn new abilities from Bottles’s brother, Jamjars, who is a bit of a hot head. As the game progresses, collecting any hard-to-get collectible always feels rewarding and satisfying. The graphics were some of the best on the N64 but the graphics of Rare’s games certainly have an artistic uniqueness regardless of what generation of gaming we’re in and I think Banjo-Tooie to this day is still visually appealing. After playing Banjo-Tooie again on the Xbox Live Arcade, I felt like it is still an epic adventure platformer that may feel like you’re walking back and forth between Banjo, Kazooie, Mumbo, and Humba more than you want to, but the funny cast of characters, visuals that range from “gritty” to colorful, good continuation from the previous game’s plot, fun and easy gameplay, and a great sense of exploration make up for that.

Banjo-Tooie was developed by Rare Ltd. It was first released on the Nintendo 64 on November 20th, 2000 and later released on the Xbox Live Arcade on April 29th, 2009 with slight graphical improvements and higher screen resolution.

Comic-con, The Dark Knight, and the many more awesome things of July

One thought on “Short Review: Banjo-Tooie”